This has been a long, hectic week.

The delivery Monday didn’t happen. We had material on hand to keep things moving along until the truck arrived. By Monday afternoon the truck was still missing, we were nearly out of material and the weather was starting to look soggy.

I called the supplier who stated that the driver had left much earlier in the day. So we packed up and went in search of the missing truck. About three miles out we found him. Sitting in a mud hole with one side of the truck nearly horizontal. After a flurry of phone calls it was decided that he needed a new phone carrier and that he would ride out with us. It was well after dark when we reached the paved road only to find it blocked by a very angry, surly woman with incredibly rude manners. Only after giving the driver a thorough chewing out and waiting for some time for the wrecker to arrive did she decide to allow two very heavily armed people to pass.

The next morning I was told that they wouldn’t try to deliver again. That and oh by the way sixty plus bags were left on the side of the road if I could be so kind as to deliver them myself. I indicated that I wasn’t so kind but I would take what I could on my normal trips to the property in a pay as I go routine and oh by the way when could I expect a full refund?

So Randy and I loaded up and sailed off to the swamp. We were still busily brainstorming strategy when we came upon the concrete

looking all lonesome and rejected along side the road. We loaded enough to keep us going another day then left the rest sitting. I was really enjoying that I had paid a large delivery fee to avoid having to handle 80 pound bags of concrete two extra times and was having to do exactly that.

We made decent progress that day. On the way out we covered the remaining concrete with tarps, towed out a truck that was stuck one puddle over and they graciously loaded the six bags they had “borrowed” in the back of my truck. The next day was supposed to be a rain day. We took the day off to take care of personal business and I lined up a trailer.

The next morning we helped load the lumber, threw on some 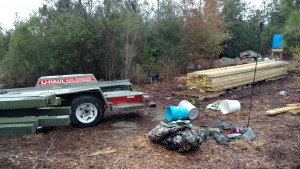 property. It was very gratifying to finally arrive in one piece with no obvious damage to truck, trailer or precious lumber. Needless to say handling the material an extra two times was so gratifying that I immediately to use another supplier for future purchases.

Anyway we made good progress this week. We have 14 posts set, two footers ready and hope to start framing the floor in back this

morning. We have one pad poured with plans to add several more over time. This pad took about 17 bags of concrete counting the footers and weighs about 1400 pounds. My current estimate is that we will have around 20,000 pounds of concrete holding things down plus the weight of the building.

How it looked at quitting time yesterday.

Hot tip of the day: Don’t put a pit bull in charge of running string.