OK so here we go.

I want to build a passive heating/cooling system for the shack. I call it passive even though I plan on using a 12 volt DC fan to move air out of the system and into the shack. I’m shooting for a load of about 1 amp.

The system is based on the fact that ground temperature about 6 feet below the surface stays about 65 to 75 degrees fahrenheit year round. A trench or a pit about this depth would be dug, piping installed then the trench/pit filled back in. As air is sucked in from the outside it is cooled/heated during its passage to the shack.

During the summer the very humid air would be cooled below the dew point resulting in condensation inside the piping. This would result in cool dry air entering the shack during the day. At night, after the dew had settled outside, the air entering the pipe would be relatively dry and gain moisture during its passage to the shack.

During the winter the cold, dry air would enter and be heated to 65 to 75 degrees before entering the shack. Last winter I saw 22 degrees one night and have been told that some winters it dips into the teens for a week or two at a time. After having spent a few nights last winter when the temps were in the 20s with nothing more than some candles and sterno for heating, some 65 degree air sounds luxurious.

For this to work, other than the obvious digging, I have to seal and insulate the shack much better than it is now. Right now there are places where I can see daylight from inside so these two projects are getting bumped up the list as winter gets closer.

I’m feeling good about my solar power now though it remains to be seen how well it functions this winter with shorter days and the sun more to the south than direct overhead. To make this work then I might have to scale back my electrical load or possibly put in dedicated panels and batteries.

Otherwise, about all that is left is some really back breaking work. I have two options I’m considering at the moment. First is a trench about 300 feet long, four feet wide, 5 to 6 feet deep. Second is a hole about 20 to 30 feet square, six feet deep.

I’m inclined to go with the hole right now for several reasons. One is that I really don’t know what I’ll encounter clearing brush and digging a trench that long. A four foot wide trench that meets up with a pile of logs could result in having to clear a path 20 feet wide just to get through. There is also shoring to consider.

A trench 6 feet deep will have to be shored. Even if it’s four feet wide there will be a danger of cave in resulting in me buried up to my neck yelling for Ziggy to “Dig Boy, dig!” Not a pleasant thought at all.

A 30 by 30 foot hole is 900 square feet of roots. A much happier number by far. I can also slope the sides more, dig the middle deeper and use only minimal shoring. Once past the roots digging won’t be all that hard. I’ll run the roto tiller around, shovel the dirt out then repeat until I’m at the desired depth.

With both approaches there is the probability that I’ll hit water. This could pose a serious difficulty depending on how fast the holes fill. It’s possible I can keep up with it using a shop vac a couple of times a day. Or it’s possible a gas powered mud pump won’t be able to cope with it. Dunno. I’ll just have to start digging and see what happens.

So that’s the idea so far. Here’s a couple of pics I found on the net which will help you visualize what I’m thinking of doing. 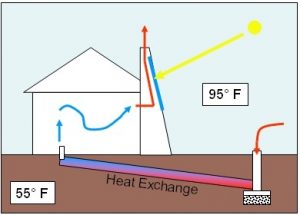 Except for the air handler the second pic is representative of the pit approach I’m leaning toward.