Time moves on and I continue exploring my new home site to be. A few days ago I completed exploring the accessible part of the new property then came to the conclusion, you can’t get there from here.

It seems that the entire southern border of the property is swamp/marsh. There’s more exploring to be done there, there may be some part of it not underwater but that’s a battle for another day. So I continued onward to the west thinking I could get to the back of the property with relatively dry feet.

OK, that’s a pipe dream. There is a band of swamp/marsh running north to south blocking the back. I spent the better part of a day looking at Google earth before realizing that I was unable to get to nearly 3/4 of my property. I decided that was unacceptable and went out and bought some high rubber boots.

The next day I began probing the swamp band running north to south with the idea of finding a passage west. After several hours I was able to find a path which didn’t overwhelm my knee high boots and found myself in a thick growth of pine and cypress with gradually rising ground. The undergrowth also thinned considerably so I found myself making decent progress.

After a few hours I decided that it was time to head out and start the hour and a half drive back to town. Since missing the path back and getting lost is a very real possibility I wanted to give myself some extra time to do a compass check and cut a new path if necessary.

Once I was home that evening I plotted the GPS points and was gratified to learn that I had trekked a little over 1/3 of the way across. It appears that I have about another 400 feet to cover then I will hit a narrow band of swamp/marsh before starting up the elusive hill. If the weather hold and there’s not much rain the swamp/marsh might not be much of a barrier.

Navigating the swamp is challenging. Besides not wanting to get covered in muck there is the danger of water moccasins, gators and quicksand. Quicksand is very rare here but I’ve used up all the luck in my life so I try to err on the side of caution. It’s also very tiring. Ankle deep water quickly becomes 8 inches deep muck when you step in it. Every step becomes a study in don’t lose your balance or you will be face down when the suction breaks.

I did notice that the swamp is down several inches from about two weeks ago. This leads me to believe that there is an outlet somewhere that is draining it. I really doubt that evaporation and plants would be enough to account for this much water loss. It would be great if I could wait until it had dried enough to get a large back hoe in to dig some large holes and a pond. 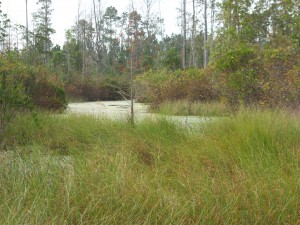 pond of some sort. It appears to be clear which might indicate that it
is spring or creek fed, both of which would be nice for an off grid life style.

of swamp. The grass is deceptive in that it’s in water knee deep or higher. Hopefully it will dry enough soon that I can get there and find out what this area actually is.