It’s been a long time since my last post and boy howdy has a lot been happening.

A little over two weeks ago I closed on my house in Sanford and I made the final move to north Florida. The buyer was a long time friend of mine who told me that rather than having some time to vacate the house I would have to be out the day after closing. Chopping a week or so out of my schedule led to some frantic last minute preparations and a multitude of unfinished business. After two weeks I’ve finally started to get things under control and actually have a bit of breathing room.

I spent nearly a week in a motel while searching for a travel trailer on craigslist. Finally I went to a dealer out of sheer frustration thinking that I would let RV professionals take care of me. Man did they ever. They took me to the cleaners and didn’t even kiss me afterward. If you ever have a chance to deal with Camping World in Lake City, don’t. The salesman and business manager took advantage of my trust and ignorance to stick it to me without the benefit of vaseline. After nearly a complete week of lies and subterfuge I ended up with a trailer which I will soon have to begin repairs on. I would have made out better buying a rolling shell and rebuilding.

So now I’m living in a campground about 30 miles from my property. The advertised WiFi runs at a speed approximately half that of a 2400 baud modem but it is very peaceful here and convenient to town and the interstate. Being close to the interstate is fairly important since the nearest WalMart and Lowes is about 35 miles away in another town. Though things have been frantic and rather stressful for the last few weeks, I am loving it here and am looking forward to the coming months.

I’ve been out to the property several times and begun clearing as well as cutting paths. There is a hill at the back that appears to be covered in pine, cypress and hardwoods. I’ve not really had a good look since the underbrush is to dense to navigate without a chain saw. Next week I hope to complete cutting a path to it and hopefully
it will be much easier going once I get into the older growth.

I left a hidden stash on site a few trips ago to see if anyone would mess with it when I wasn’t there. So far it’s not been disturbed and I’ve expanded it quite a bit. It’s under the camo tarp if you are having trouble picking it out. 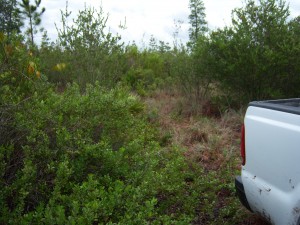 My initial efforts were to clear an area to stage from then start fighting my way toward the elusive hill on the back of the property. There is an area at the front of the property where a logging company chipped logs years ago and was built up slightly as well as not so densely overgrown. After a lot of sweat, cussin’ and chain saw I was able to get the truck in and out but just barely. 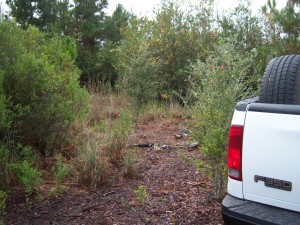 Part of the problem I’m experiencing out here is that my truck doesn’t turn in a 40 acre field and I only have 30 acres. This leads to a lot of 197 point turns.

I’m also trying to not cut any “good” trees such as oak, maple or pine. Eventually I will have to choose a few to euthanize but for the time being I’m willing to work around them.

On a couple of occasions I’ve missed the turn into my property. It isn’t at all hard to do since in a weeks time the plants will regenerate and seem to thrive on Roundup. I’ve been told that the underbrush is to dense for a bush hog so obviously this isn’t going to be an easy effort.

Burning came to mind but then I had a flash of poor Bambi trying to help her aging mother get to the swamp with a broken wheel chair and immediately discarded that idea. Then in a stroke of pure genius

I asked a friend I know in town for help and he came out with some giant industrial gonzo mower. I’m expecting a Christmas card from Bambi this year. We’re placing Miss Piggy on the endangered hog list though. 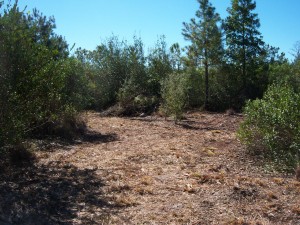 Now I’m able to get in and out with only a 36 point turn but it’s still a lot better than before. Once we get enough cleared we’ll be opening up a turn around but until I see more of the property I’m not going scorched earth yet.

In this picture you can see an area we’ve cut out for a fire pit. I was a bit skeptical at first but it was 34 degrees when I woke up this 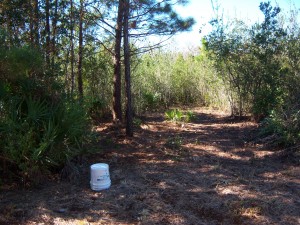 morning and had I been on site I would have been going “Fire pit! Hell yeah!” I have plans for a picnic table under the pines center and left. It’s also the entrance to the path we’re cutting to the back of the property.

Cutting this much underbrush produces tremendous amounts of cut brush. Although this should be intuitively obvious it’s not until you
start getting a few piles of brush about 6 feet high, 8 feet across and 20 feet long that you fully realize this. I know you’re thinking “Fire pit! Hell yeah!” but I still have to clear some more around it so Bambi doesn’t go sending DCF after me.

The path to the back is slow going. Randy started one his first day out which I continued next time while he was mowing. His path looks like a super highway and is nice and straight. Mine looks like a drunk came through with a chainsaw attacking pink elephants at random. Hoping to speed things up a bit I’m following game trails as long as they are generally going in the direction I want 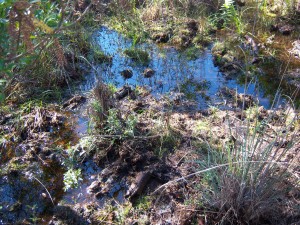 to go. This has led to several dead ends as I run into swamp along the southern end of the property. I’ve spent a lot of time back tracking and checking a compass.

Today I made a major breakthrough. I was following a game trail heading roughly west when I came to a rather large open area. It was pure swamp to the south but I could see open water which might

indicate a spring or creek. Good chance that it could be turned into a fish pond at some point. After it gets cold enough to put the snakes in a coma I’ll have to explore it with hip waders and a life guard.

The really nice part is that to the north and west it was fairly open and I was able to cover about 50 feet in a very short time.

Needless to say I was excited and shot a few GPS shots to track my progress once I got home. Google Earth didn’t hesitate to shoot me down though when I did a measurement and realized that I’ve covered about 325 feet so far. Oh well, only 1500 feet to go.