OK…..I finally have internet of sorts out in the swamp. Last year I decided that having internet in town wasn’t worth $70 a month since I was only in town about 4 days a month. As luck would have it, about that time, the WiFi where I stay sometimes went down which really made it hard to connect.

Recently I changed my cell phone plan which should enable me to at least post periodic updates. Not sure about pictures but hey, it’s Verizon, you can’t expect anything better than marginally acceptable.

Last summer was a full blown nightmare of rain and mud. At one point my driveway was pure mud knee deep in spots. At one point my truck got stuck and I had to let it sit for three days before it dried enough that I could get out.

The roads weren’t much better. On one of my infrequent trips to town I got stuck in a puddle (lake) that I had easily driven through the day before. After breaking the cable on my 15,000 pound winch I really started to worry. Thankfully John Boy was out at his place so I was able to call for help. (Only had to stand on the roof of the truck and hold the phone high to get a signal.) 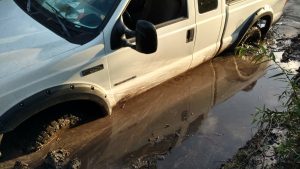 A military snatch cable and four attempts later my truck was free at last. On the final attempt he had his truck backed up to the point that his rear bumper was over the hood of my truck. Yeah, it was stuck good.

The next day five of us were out filling the hole and hauling in dirt. Amos bought a nice dump trailer last summer and we gave it a work out. 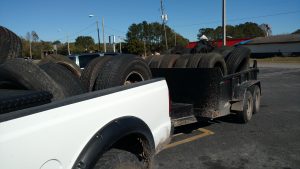 I started a deck on the front of my cabin but ran into cash flow problems so it’s sitting out there framed and ready to finish. Hopefully this year I’ll be able to get back to it.

I’m always on the look out for free/dirt cheap building materials. One day, after staring at Amos’s dump trailer for a few hours I had an idea. Rather than take a nap I thought about it some more. Sometimes the motivation scares even me. 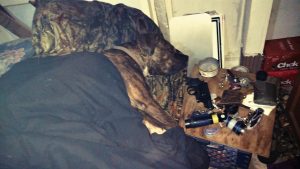 Anyway, I began to take the trailer to town with me occasionally and brought back junk tires. I had been wanting to build a berm so I could do some target practice without worrying about where the bullet ultimately went. So far I have a berm about 15 feet wide and about 5 feet tall. The tires are filled with dirt with a dirt and brush fill behind. Eventually I want to get it to around 7 feet high but it’s adequate for now.

We’ve also begun to use tires for road repairs. We put down a layer of tires in a mud bog, add dirt and level. The tires do a great job of holding the dirt in so when all the road hunting vermin get to tearing up the roads the dirt isn’t slung out. Needless to say, roads are a major concern out here. Taylor County does absolutely nothing to justify the high taxes we pay out here so any road work is strictly up to the land owners. Hunt clubs and road hunters simply reap the benefits and threaten the land owners periodically. 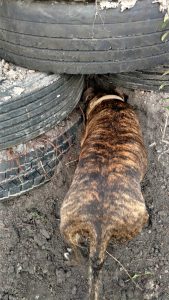 Got a lot of catching up to do but I’m going to post this and see how it goes. With any luck Verizon won’t go totally flaky and I can start keeping this blog up again.

BTW, assuming I’m able to post, I’ve had to delete the user data base. I’m working on it so that all both of you can comment but it may take a bit more time. 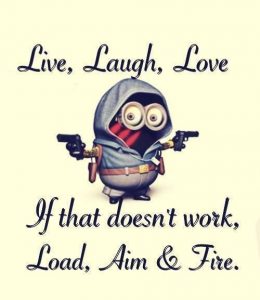