I’ve had a lot going on so it’s been awhile since the last post.

The clearing and exploring has continued with no great breakthroughs. We’ve continued to have an unseasonable amount of rain so the roads are terrible out there. My car wash bill is outrageous since I don’t want the mud setting up as it takes on concrete like characteristics in a very short time.

My mulberry “trees” seem to be doing very well. They were 5 inch 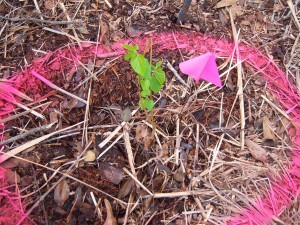 bare twigs when I planted them and now they are 7 to 8 inches tall and sporting a fresh new crop of leaves. They are russian mulberries which I am told are the ones preferred by silk worms. Perhaps someday I’ll buy some eggs and see. The red circle around the plant is just to let me know not to grind it down when doing maintenance. I have to visit previously cleared areas regularly and chop the rapid regrowth of undesirable underbrush.

Part of my clearing has been geared toward building a pole barn shed. I finally hooked up with my GC contact and we kicked around the plans I had drawn up. His reaction to my design was “Woof! That’s a sturdy shed.” I told him that I was looking forward to riding out a hurricane in the swamp in a home made shed. I admit that I’m very much scared of the idea but if I am to end up living out there full time at some point I’ll have to do it.

I have most of the material scheduled for delivery on site this coming Wednesday. When I ordered it they asked for an address to deliver it to. When I offered to give them the GPS coordinates they called the delivery driver in for directions. He was confident that he

knew every inch of the surrounding quad county area and proceeded to tell me where my property is located. After about ten minutes of me saying “No” he finally gave up and stalked off in frustration. I’m guessing that he’s going to just drive in that general direction then wander up and down nameless roads calling my name in hopes of finding me. I finally left my phone number and told them to call me so I could guide him out.

The shed will be 12×12 with a 6 foot front porch. A second floor of 6×12 foot will have a 6 foot balcony. The roof will be flat since it will be used for a patio/deer stand. The top floor roof will also act as a platform for mounting solar cells, a water barrel and solar water heaters. Rainwater runoff will be collected, filtered then added to the potable water system.

I bought six pecan trees that haven’t been planted yet and five more bamboo, also not planted. I ordered six blackberry bushes, a raspberry bush and four muscadine vines. Apparently muscadines come in male and female plants and you need both to have fruit. I’m guessing that’s a marketing ploy thought up by some savvy Seminole Indian corporation several thousand years ago.