Yes. It’s Christmas. It’s not happy holidays, or kwonzer or any other happy horse shit crap. It’s Christmas. If you don’t like it move to Iran or some other third world shit hole and see what your politically correct bull shit gets you.

Moving on. I had a fairly productive week. I continued with clearing and decided to change the location of the pole barn shed so it wouldn’t be visible from the road. The area I’m going to use now has a lot more cover which will help protect it during storms.

Finally there was a rainy day that allowed me to burn some brush. We started with a slow steady rain that was perfect for lighting off the fire pit. After pouring some gas on the wet wood I tossed in a 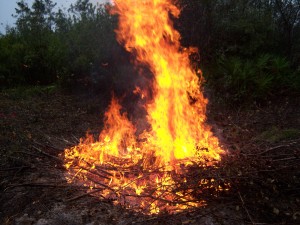 match and within two minutes I was faced with what resembled a forest fire in Kalipornia during a drought. This fire went an easy 30 feet in the air and I began to worry about the paint on my truck parked 50 feet away. I’m standing there going “WTF?” when my helper goes “I done built me a good fire. I put all that lighter knot in there.” Looking over I quickly realized that the pile of lighter knot I had gathered from several rotted pine trees was missing and that my eyebrows were starting to melt. I’m looking for a new helper if anyone is willing to work for 30 dollars a day.

Well, the fire died down in about 3 minutes and probably raised the local temperature by several degrees. Realizing that his lives work was about to be extinguished by the rain my helper began a mad

scramble to add more brush thus keeping alive some dream of immortality. So we burned brush. And we burned brush. And we burned more brush. I can’t begin to tell you how rewarding it is to be hauling a ton or so of brush to a fire pit in the rain, with water running down your butt crack all the while arguing with someone over whether you should be out looking for more lighter knot or simply burning brush. I hope to god he never discovers tannerite.

Anyway, we managed to get five piles of brush burnt in between the heavy rain spells and having to argue over lighter knot. After about 5 hours we were ready to load up, wait on the fire to die down and began the swim home.

The roads out weren’t as bad as expected. There were a lot more

mud puddles but going slow tamed them easily. Unfortunately they wouldn’t be so easy to navigate the next time in.

Needless to say, I was very disappointed to find that the very, very expensive bamboos was not happy with its’ new home and had decided to pass on. I have absolutely no idea why it would take such a socialist democratic point of view since the lady who sold me the bamboo assured me it was a very conservative type of plant. Anyway, I moved it into the shade in hopes of reviving some sort of American spirit and possibly salvaging some of my cash. 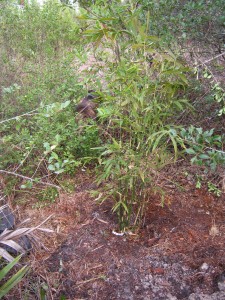 The other bamboo on the other hand seemed happy with the new home which gives me great hope for a future of 20 foot bamboo.

So between the clearing and the forest fire a lot of area was opened up this week. 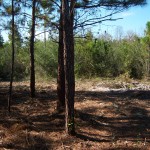 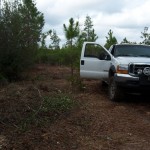 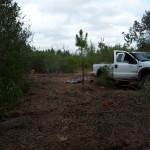 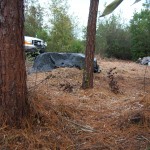 Today I also noticed that the mulberry seedlings I planted are putting out sprouts. I’m keeping my eye out for some mature trees to get cuttings from so I can possibly make some mulberry wine next fall.