Wow. Been nearly two months. Not to worry, not much has happened. Not worth getting excited about anyway.

One big news item though, I now have a conex in place. It’s only been a year and a half coming but it’s finally done.

Last week I met up with Amos early in the morning in town and we headed to Micky D’s for breakfast. (yuck) He had ordered two twenty foot conex out of Jacksonville and through some unbelievably creative financing on his and his brothers part I was to take possession of one of them. They were supposed to be at the interstate about 10 in the morning so we were in high spirits in spite of this months recycled coffee grounds at McD’s.

After a Pepto Bismol chaser we headed to town for material. Then he got a call that the truck hauling the boxes had been stopped for a DOT inspection would be delayed. Is anyone really surprised? So Amos called the wrecker and told them we would be delayed an hour.

Our plan was to meet the truck at the interstate, have him follow one of us as far out as possible, drop the boxes, then have a tilt bed wrecker deliver them the rest of the way. Not that many moving parts so obviously not much could go wrong. Right?

After gathering material in town we headed back to my trailer to sit around and solve the worlds problems while we waited. We gave up on that rather quickly since no one listens to us anyway. I do have to

admit that I liked the idea of an open season on politicians but in today’s PC world we knew we would never be able to sell it.

At the appointed time we were off to the interstate and our first look at the boxes. While we were waiting for them to show Amos tried calling the wrecker again. No luck. There was still some time to waste though.

Then the boxes showed up and, well, they were ugly. I mean shipping containers aren’t exactly glamorous to begin with but these were

decidedly ugly. However they did appear solid and we both had plans for painting them anyway. Still no wrecker so we decided I would lead the truck with the boxes out while Amos went in search of the promised wrecker.

Although slow, the trip out was entirely uneventful. The guy driving the truck was obviously skilled and seemed like a nice guy to boot. I took him in the long way since it was a far better road plus there was

an area where he could do some maneuvering and make the sharp left turn that was required. A few minutes later we were at the head of our road which was where we planned on leaving the containers for the wrecker. After a bit of backing and jockeying around he dropped the containers in less time that it takes to tell then was on his way.

On the way out I had received a text from Amos indicating that he had found the wrecker and was on the way. Thinking that they were close behind, I waited patiently while the Zigster gave each box the extended sniff inspection. Having passed inspection we waited. 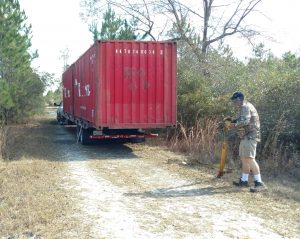 Then inspected the sides of the road. Then some unrecognizable mess that Zig wanted to roll in but I was able to talk him out of. Then waited. Finally I saw Amos approach with the wrecker in tow. So to speak. He wasn’t

really towing it but by the end of the day I had to wonder why not.

I had to run to my property to take down a fence so Amos and the tow truck people stayed and began loading his conex. By the time I finished with the fence they were already in place and unloading the first box. I remember thinking

that this was going very well so we should be done a lot sooner than expected. So I stopped by to watch. And watched. And watched some more.

An hour later I was sitting on a stump in the shade, drinking lukewarm water, and watching. If it wasn’t for the fact that it was going to get dark in about seven hours it might have been funny. It really reminded me of that old saying about two monkeys engaging in carnal pleasures with a football.

If one of the wrecker drivers wanted to pull the truck forward, the other was equally sure it needed to back up. Raise the bed, no lower

the bed. Slide the bed back, slide it forward. Wait, wait. Pull the truck forward. Finally, with a healthy thump, the front of the conex fell the last few inches to the ground to a collective sigh of relief.

Then it was off again to collect and deliver my container. By now the

football has had enough of this crap and is fighting back with everything its got. Two hours later, I’m sitting in the shade drinking lukewarm water and watching. Amos and I agreed that the football was winning by a large margin.

By three o’clock I had to go back to town and left. Amos agreed to keep an eye on things. In town sometime after five I got a text that it

was in place. My business in town didn’t conclude till nearly seven so it was way to dark to drive out that night. I spent the night in town and headed out at the crack of dawn the next morning.

Figuring that he needed rest after the day before, I stopped by

Amos’s place, left some croissants and fresh brewed coffee for a peace offering then eased on to my place.

I pulled in expecting to find the shack laying on the ground, fresh plowed ground as far as the eye could see and the conex on one side. I was pleasantly surprised to find everything in order and the box sitting very close to where I had

hoped it would be.

After a couple of week ends of moving stuff from the shack to the box, I now have some room and can start to finish up insulating and sealing the shack. With spring just around the corner I want to get the second floor done so I can sleep up there this summer. More on that later.

Many thanks to everyone using the Buy Amazon link. In a month or so I’ll be able to add a solar cell which will greatly improve my spirit at night. It gets really dark out there.