Went to town yesterday. (today is Tuesday) The roads were very good. There’s a bit of washboard on County Line and Camp P but even in my truck it wasn’t all that bad. There are a few soft spots that will slow you a bit but even they were minor. I was in 4WD but I usually stay in it anyway. I’ve found that my truck is so heavy that it handles better if I just stay in 4WD. Also, my clutch is going so I’m easing it along as I can until I can have it replaced.

There is a rather large soft spot developing at County Line and Max. I would suggest going around it as much as possible.

We have had several heavy rain showers this last week. Water is still running off and not puddling on the roads to any major degree.

The Preacher went out Saturday. He took the old way. He reported that West Boundary is pretty wet until Wire but that there was hard bottom in all the puddles. From Wire all the way to the cattle gate has been filled and graded. He said he was in 4WD but didn’t really need it for the most part.

When we go to the cattle gate yesterday we had a rather unpleasant surprise. It seems that we’ve attracted the attention of an extremely untalented street artist.

For anyone who hasn’t been out lately, the old swing gate has been replaced. I guess you can only run over a 15 wide, 5 foot tall gate so many times before it just gives up. For the life of me I can’t understand how people don’t see that gate in time to avoid hitting it. I was legally blind until a few weeks ago and still could figure out when to stop and open it.

Anyway, we seem to have attracted the attention of some ghetto rat with a can of bright red spray paint. As I said, he’s not very talented since he went outside the lines on several occasions and apparently only has one color of paint. Everyone knows that any self respecting tag artist has two or more colors to make their work really stand out.

Also, his message needs a lot of work. “Fuck you!” just doesn’t convey much of anything in today’s society. With rampant confusion regarding gender, bathrooms, and little boys competing against little girls in sports dominating the prime time news cycle, such a phrase just doesn’t have a black or white meaning or the power it once conveyed. I remember back in my day it was either a challenge or a question. Nowadays who knows? 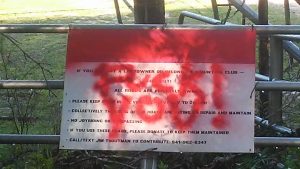 On a scale of 1 to 10 I have to give our street artist a 6 for stealth since I’ve not heard of any accidental shootings, a 2 for talent since they were all over the place with only a single color of paint, and a 2 for message. So it’s back to the ghetto for them.

I hate to be so harsh on what is obviously young and immature talent but I’m not paid to be politically correct. And no, I won’t loan a brother a can of paint.

It’s Sunday afternoon. We’ve had rain off and on since Thursday night. So far we’ve had about 5 inches.

As everyone is aware, we had a very long dry spell. Many of the roads were very soft. Much of County Line was deep, fine sand and rutted in several places. A lot of this was from the fire a couple of weeks ago but also from the simple fact that we had absolutely no rain for weeks to settle the roads.

Starting Thursday night we had rain of maybe an inch or so. I had to drive out Friday morning early and it wasn’t bad. A few spots I started to bog down a bit and had to downshift but good overall. I came back in Friday afternoon and it had obviously rained heavy while I was gone.  I went into 4wd at the cattle gate and stayed in it.

Camp P from Tower to Kelly was a slow roll. They are logging on Kelly somewhere so there are about three football field length areas that are soft and deep.

After Kelly, Camp P was pretty firm except for a few small soft spots. I stopped a couple of places and dug small trenches to drain water that will hopefully help.

County Line was pretty much a slow roll to nearly Gum. I stopped a couple of time to dig trenches but had to be careful. As heavy as my truck is it tends to sink like a rock in soft sand.

On the way in the ditches were starting to fill but still had a way to go before getting to road level.

The Preacher came in Saturday afternoon. He pretty much reported the same experience saying that he was in 4wd high most of the way and having to go to low a couple of times.

At my place, the rain has been draining and soaking in fairly quickly. Today I started to get standing water. I’m guessing that the roads are doing the same this afternoon.

The weather prediction is for rain through Wednesday then tapering off quickly. Hopefully we’ll have a few dry spells until then so the roads drain a bit.

If anyone has an update text, email, or leave a comment.